Nitin Jain nitin1578
The post tries to decipher the past market reactions around similar periods, which one can keep in mind while deciding the current strategy.
Use Scan QR Code to copy link and share it

Two questions that everyone has in mind currently

There are varied opinions on both the questions and they are as confusing as they can get.

On question 1, I would dare not attempt to try answering it, not being my area of study. However, I would surely suggest that anyone interested should definitely read this piece – the most balanced and the best analysis and opinion on the subject that I have come across. Its from Ruchir Sharma of Morgan Stanley,  someone whom all of us love and admire !

Here it is important to understand that what we are facing today is not something where parallels cannot be drawn from the past ! We have seen India shining phase of 2004 elections, UPA-1 reelection expectations in 2009 and Modi Wave of 2014 elections and we have seen how stocks markets have behaved before, during and after those periods.

Implications of the above past analysis on 2019 election results

First lets summarise the key inferences from the above past analysis –

What Indian stock market has done in the last 1 year and is there any parallel of that in the past? Lets have a look at the following chart – 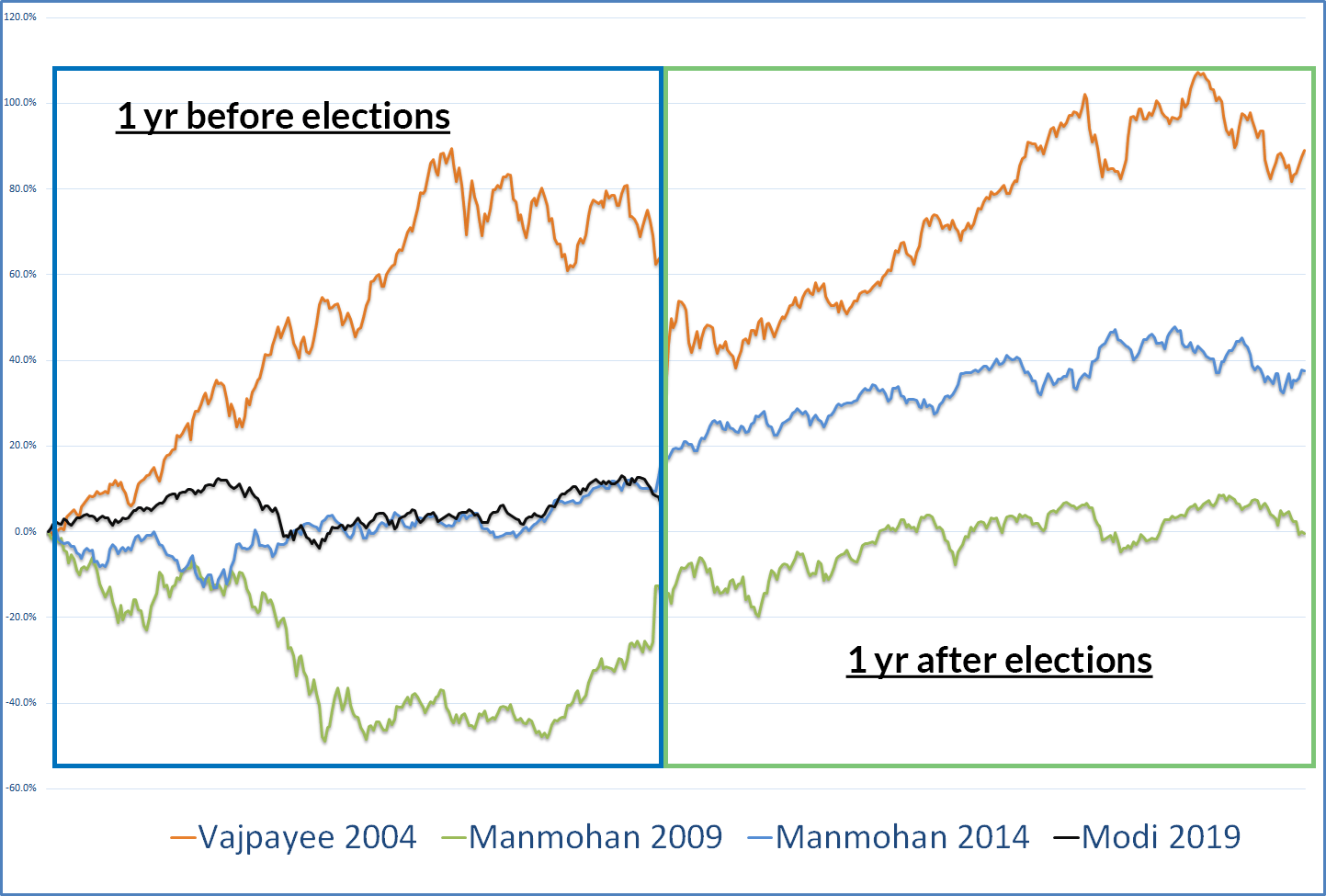 What about vis-à-vis global markets?

So given the above, this is what I believe how the Indian stock market will perform under various scenarios

All this is assuming supportive global markets as discussed above.

Market will love it on immediate basis and you will get a significant uptick. However, I would predict a decent correction after that and maybe market giving up all the gains gradually when institutional investors might be prompted to book profits.

Modi is now a known person and investors know his leadership style. They like him but would wait to see further policy decisions and its impact on corporate earnings. The fact remains that currently the macro environment and corporate earnings are not supportive.

I would be a seller on the uptick in scenario 1

Scenario 2 – NDA returns but with lot of jugaad

Market might not like it on an immediate basis but would be happy that Modi is coming back. There might be a small correction on immediate basis, which would be bought soon and infact in this scenario I expect India to see a significant follow through.

Many investors might like that policies of the government would now be kept under check and their wont be any disruptive announcements.

Significant immediate downtick might happen with an immediate recovery to in and around current levels. Congress again is known to investors and hence they would not be overly worried. Besides, current valuations are not that expensive especially in the small and mid cap. People will also draw comfort from the fact that policies of Modi government will start yielding results.

I will be a significant buyer on downtick in scenario 3

The most unsettling scenario from an investor’s perspective as we would be bound to go for re-elections sooner or later. Significant fear would take over, even if not on the downside atleast stopping it to move on the higher side.

In scenario 4, I would be forced to become inactive for some time or completely move towards the defensive blue chip stocks.

That brings me to the end of my post. I hope you enjoyed reading it as much as I researching and writing it and helps you in strategizing your participation in the Indian stock markets.

Please feel free to connect on nitin@candidcap.com for any issues or suggestions.

Samvat 2076 begins: 10 pointers to success in the stock markets

Mystery around Nifty movement on May 23, 2019 – the election results day – inves4

[…] highlighted in our recent note analysing impact of 2019 elections on stock market, under these kind of election results (scenario 1) we did expect profit booking after initial […]

[…] reason I have been continuously highlighting – SENTIMENTS (e.g., refer my pre-budget note and pre-election results […]

So far #banking results are confusing and difficult to conclude whether wheels have turned.

Most ground bankers I speak continue to remain non committal about asset quality.

Liquidity in general continues tight barring for top cos.